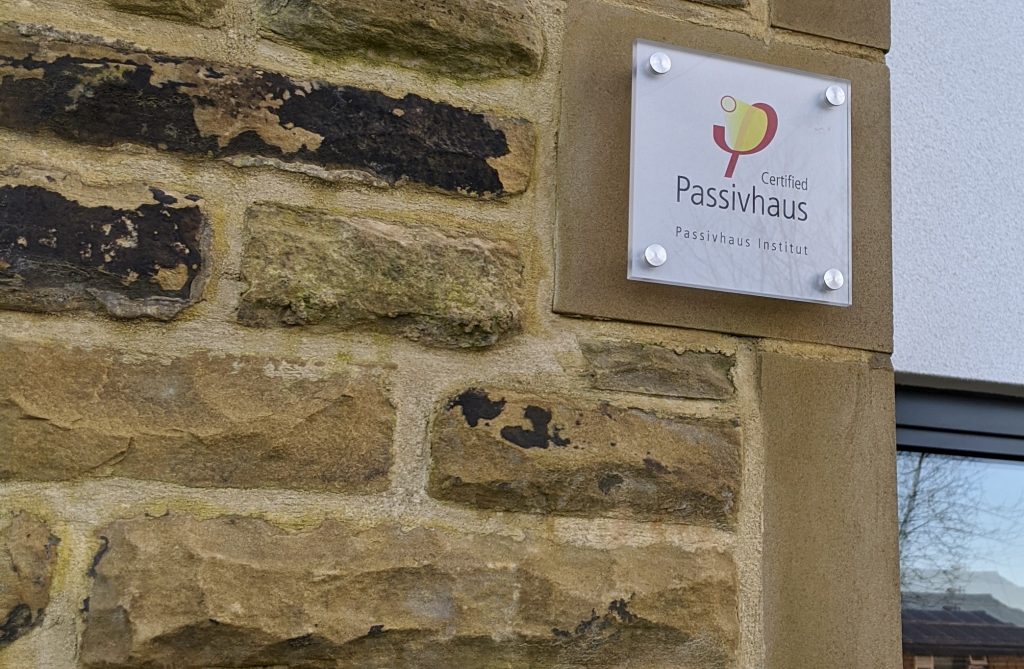 During the summer I and a few of my Passivhaus clients made videos for the summer Passivhaus Open Days – transferred online thanks to Covid-19 – and during these it was notable that wellbeing cropped up. Life in a Passivhaus was described as “like being on holiday” – there was something subjective beyond the U-Values and airtightness scores. We decided to look at this and invite discussion – there is a video of the event here.

We had participants from York and elsewhere in the north, from Liverpool, Scotland, Australia (including owner of a strawbale house there) – and owners, aspiring owners, students and architects. The workshop started off with a brief presentation from Tim & Marilyn Larner about their experiences with Holly Garth Passivhaus, and especially the relationship between the house and its site and broader setting.

There were questions and discussion around the systems required, and the control of them – whether occupants understood them. The response was mainly that once the basic controls were right and settings right, little input was needed. MVHR usually has automatic response to moisture or CO2, and fluctuation in temperature is small, even without adjustment of heating controls, although Tim Shepherd noted that “it’s a bit of a learning curve in that you have several different bits of technology to work with. If I was doing it again I would ensure it was better integrated between the power production, consumption, heating water heating availability” also commenting that a DHW cylinder without a “percentage hot” read-out was very old-tech.

There was a question about Building Control and whether there were issues in gaining approval. In the UK, the Building Control system requires SAP assessment and production of an EPC, which can be wildly unrepresentative of the building’s actual performance. But because all the basic PH standards – U-values, glazing areas and performance etc – are much higher than UK Building Regs, this isn’t usually a problem (just an extra cost).

A related issue was touched upon in respect of MVHR:- in the Uk the system must be commissioned to ventilation levels for Part F of the Building Regulations, which is designed to prevent condensation and mould growth in buildings or far poorer performance. As a result, a number of the Yorkshire projects were initially over-ventilated, and were re-commissioned with lower flow rates to avoid energy wastage, dry air etc. Boost settings still deal with higher ventilation rates when needed.

There was a question about heating methods – “I’d be interested to hear any comments about relative merits of underfloor heating, post heating on MVHR or infra-red panels”. The local projects vary – Tim & Marilyn’s house has ground floor underfloor heating only – interestingly shifting the heat up through the building has been an issue. Tim & JJ (Hob Moor) have an MVHR post-heater and heated towel rails, all of which generally works fine but they’re not afraid to use a simple fan heater to boost temperatures if needed – for example after the house has been empty due to travels. Peter & Margot (Derwent Rd) initially had timers controlling towel rails, but switched to thermostats which work much better.

There was a question about actual-v-predicted performance – “you mentioned how PHPP is a better software system than SAP, is there still a noticeable performance gap between the predicted energy performance and the actual energy performance?” Worldwide feedback suggests that on average PHPP predictions are very near the average performance across large numbers of projects. There is individual variation, although this may be more to do with occupant behaviour than poor software. Tim & JJ live mostly in t-shirts and shorts right through winter, whereas Tim & Marilyn are aiming for a zero-energy balance and are happy to tweak the thermostat and clothing layers to suit.

There was an interesting question about air quality – “do any of the occupants suffer from asthma etc and have experienced reduces symptoms or improved health?” Tab (Toller Grove in Bradford) replied that he’s been a long-term sufferer of sinus problems but has found these have eased since moving into his Passivhaus, and Tim & JJ’s daughter’s allergies are less problematic when she stays with them. There was a further interesting take on this from Greg Mathers – “I have a friend that did a Passivhaus retrofit. His wife suffered from insomnia her entire life. In their new home, that has been cured due to the fresh air and quiet of a Passivhaus”.

There was a discussion around Air Source Heat Pumps (ASHP) and MVHR – there are now combined units on the market but no-one present had experience of them other than an assumed slightly compromised performance. Brian Singleton (ADM ventilation) commented that all installed kit needed to be PH certified and that there was an increasingly large choice for this. (In fact non-certified kit can be used but the PH certifier has to be 100% sure of actual performance).

Overall, a wide range of issues have a bearing on wellbeing and there is more to it than we covered in an hour. Hopefully there will be further opportunities to explore this collectively. 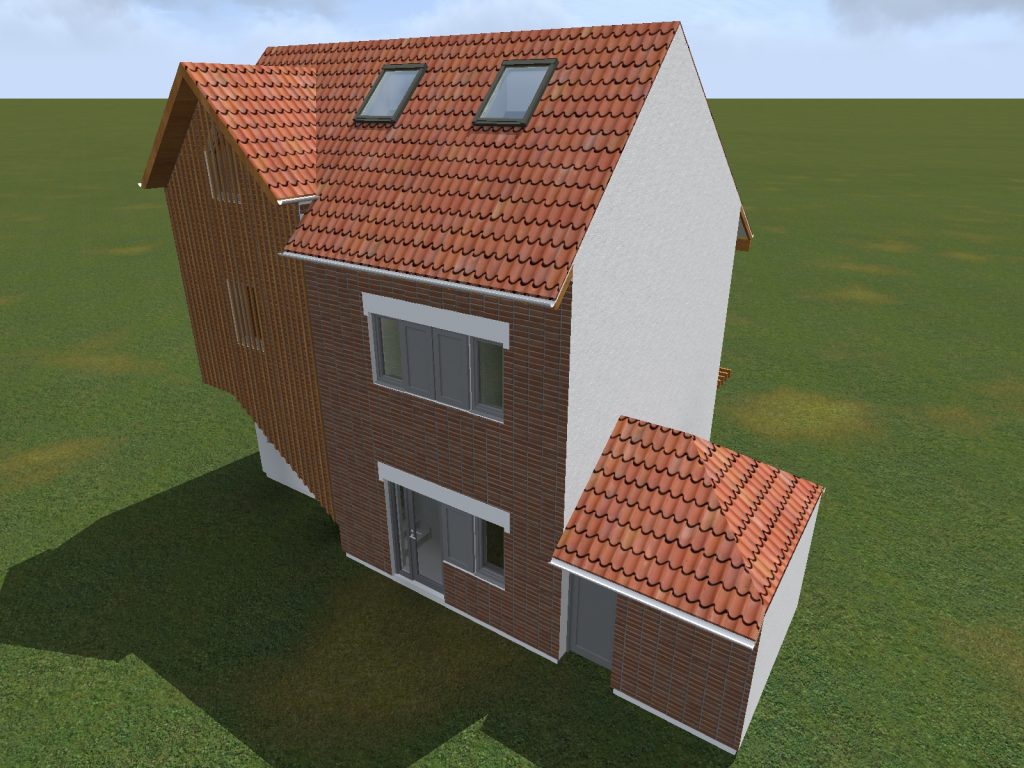 CAD model of Derwent Road Passivhaus, showing small northern elevation glazing areas, offset by variations in texture, dummy “shutters” and lintels, all to give architectural interest to the street elevation. 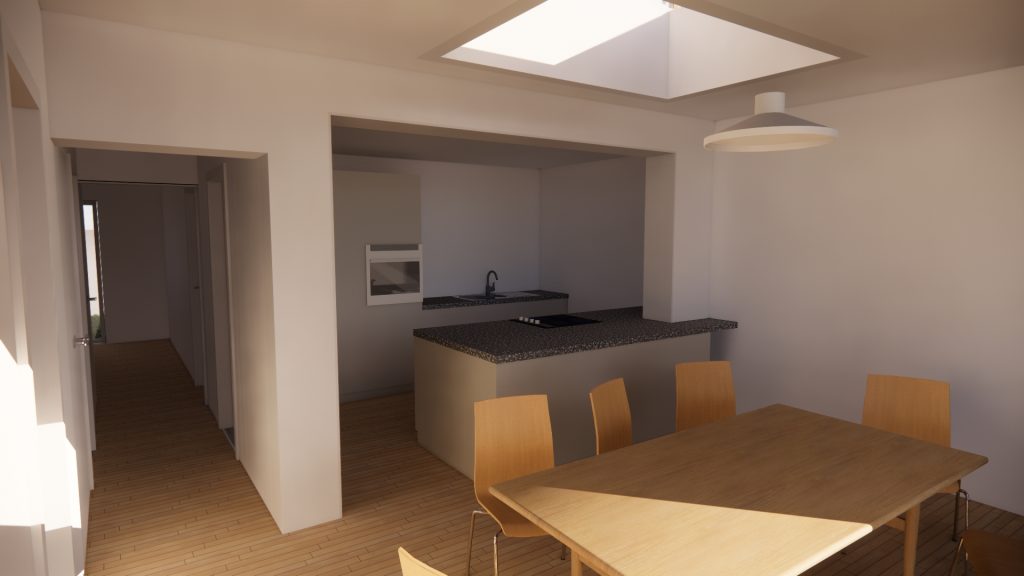 Visualisation software can be a really useful tool in Passivhaus design, allowing sunlighting / daylighting to be modeled. In addition to ensuring problems of summer overheating can be avoided by shading elements, this gives a chance to see how internal spaces will feel.

Here, an internal kitchen in an extension/retrofit project is lit by generous rear glazing and a large rooflight, and the impact of these can be explored.

PrevPreviousBack to Black & White
NextNarrating the Process of DesignNext