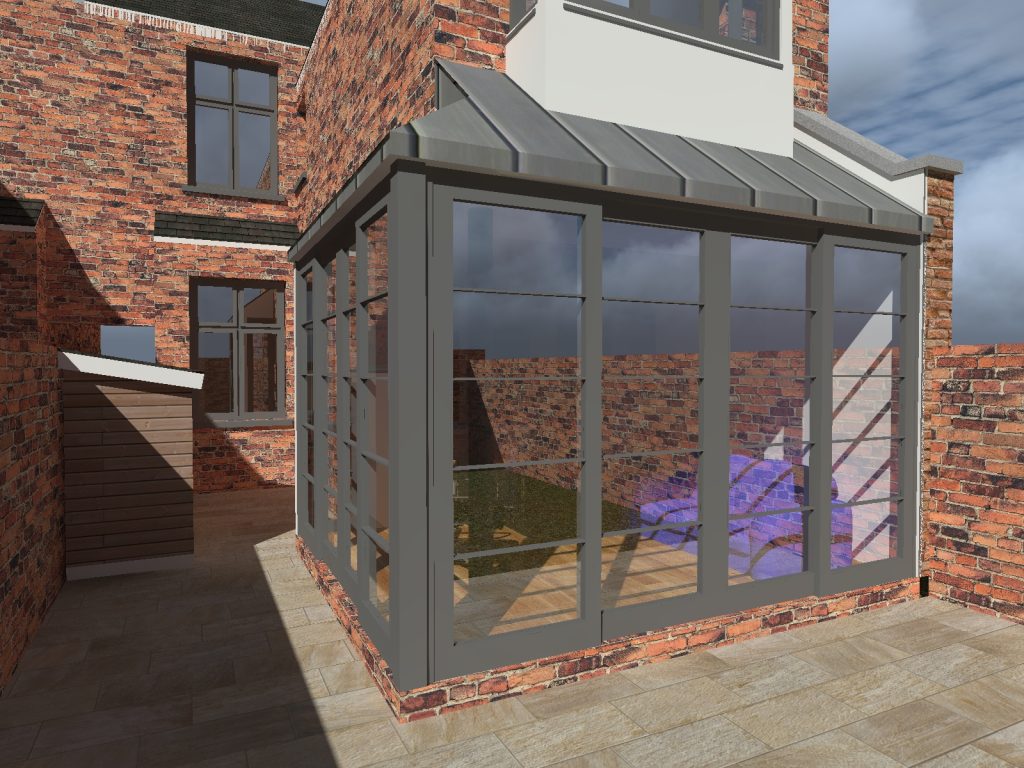 A few days after lockdown was announced in the UK I got an enquiry about a possible job. The client wanted a small-ish rear extension, she was an artist; could I take this on without actually visiting the site or seeing the building? Well, these are strange times and we’re all learning new skills so – yes, why not?

We talked through – via email – how it would work. She emailed me a bundle of photos of the existing rear of the house, inside and out. I emailed her examples of a measured survey I’d done on a nearby house (in fact ten doors up the street and hence pretty similar). She checked dimensions and sent me back a marked-up plan. She spelled out what was important to her about the rooms and what she wanted the proposed changes to do – a little more space, but particularly more light and more drama.

This gave me enough information to set up an “as existing” 3D model of the back half of the house, and drop it onto an OS plan for orientation. I modeled the external walls of the house next door to ensure the shading was representative.

Next was a first iteration of proposals – a “safe” version which gave extra living space on the rear of the kitchen and better connection with the garden but used existing openings as a starting point, and minimised any risk of overheating. An online meeting and walkthrough using GoToMeeting was arranged, and this established that sunlight and openness was more important than extra space. A second iteration was produced which responded to this – opening up more of the rear, and shifting the building envelope out only slightly – but bringing in much more light, and using glazing bars to heighten the drama of sun and shade.

This was getting closer to what was wanted, so I set up a basic kitchen layout and replicated their own furniture using objects in Artlantis. A couple of versions followed which moved the bulk of kitchen furniture around to give the best flow of space and play of lighting.

Externally, I looked at how to keep the pallette of materials simple – basically just the windows / glazed doors and a simple lead hood on top, tying in with the existing rear bay window above.

Again, we met on GoToMeeting and used screen sharing (in fact individual window-sharing, which is even better) to walk through the proposals and explore internal views, and the effect of sunlight at different times of day or seasons. So, after only a couple of weeks and (checks on ProWorkflow) slightly less than two days of my time, we had a design proposal which was ready to go to a structural engineer and builder to firm up costs.

I’m still looking forward to seeing the building in the flesh – and online meetings still feel slightly weird – but it’s still very possible to push projects forward, with the clients completely immersed in the design process. Vectorworks, Artlantis and GoToMeeting are all proving very, very useful tools at a time when it’s important to try new ways of working.

An update:- I got a lovely email from the client saying the work had been finished and issuing a distant invite for some future date beyond lockdown. She sent me some photos, which I’ve shared below.